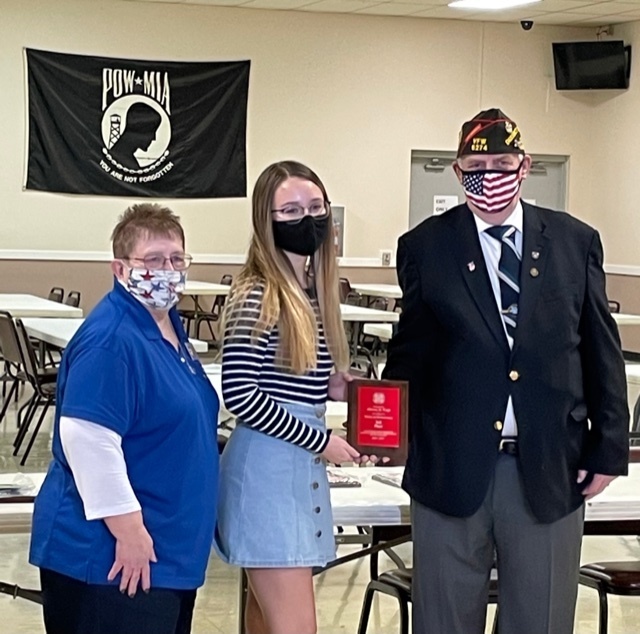 Ally Vogt, PHS sophomore, earned third place in the Voice of Democracy essay contest sponsored by the Veterans of Foreign Wars (VFW). The VFW holds an annual essay competition to promote patriotism. Vogt was recognized on January 3, 2021 for her outstanding essay on "Is This the Country the Founders Envisioned".  See Vogt's full essay below.

Is This the Country the Founders Envisioned?

John Adams, Thomas Jefferson, and George Washington are some names of the men that had great expectations for a new and modern country. They wished for freedom, minimal government intrusion in the lives of citizens, and equality for everyone. The reason that patriotism is so important to Americans is because we pride ourselves in things like these which makes our country one of the greatest in the world.

The famous phrase “All men are created equal” was definitely not true when America was first putting down its roots. The founders wanted to achieve equal rights for all people and over time, we’ve adapted our country to the point where the word “equality” is much more relatable to people of color, women, and even non-citizens. Slavery and the lack of women’s rights plagued our society at the time that the founding fathers fought for us to create a new nation. These are some things we have successfully corrected over the years. America is one of the few countries where men and women have access to life, liberty, and the pursuit of happiness. We are allowed to achieve any goal, pursue any dream, and realize the fruits of our labor to whatever ends we desire. While there is always room for improvement, I’d say we have taken what the founding fathers envisioned one step further and turned our great country into something that I’m sure they would be proud of.

The biggest difference that sets America apart from anywhere else is the emphasis on freedom and liberty, which has brought our land things that people in other countries could never even dream of. We have unimaginable freedoms like freedom of speech, press, religion, freedom to assemble, and the right to bear arms. They offer more chances for individuality and that’s what makes our country unique. Without opportunities like these, how can we even call ourselves America? George Washington once said, “If the freedom of speech is taken away then dumb and silent we may be led, like sheep to the slaughter.” This analogy is kin to the dictatorships that have brought many other countries to the ground throughout history.

On the other hand, one of the grievances that was stated in the Declaration of Independence was that British troops were being pardoned through mock trials after murdering state inhabitants. This is very similar to what we are seeing today with police-involved shootings. Police officers are seldom tried and rarely convicted for the shootings causing the protests, and are often pardoned by the courts. If the police were held to the same standards as regular civilians, would the Black Lives Matter movement have even been created?

It’s hard to imagine politics today without Republicans and Democrats. Would the founding fathers approve of what amounts to a two-party system and politicians making careers out of running for office? John Adams was quoted as saying, “There is nothing which I dread so much as division of the Republic into two great parties… which is to be dreaded as the greatest political evil under our Constitution,” while George Washington rejected calls for a third term as President and wished to see the country advance with new leadership. The division that results from the current political system most likely would not have been approved of by the founding fathers. The founders would be proud of the opportunities America provides and represents to the rest of the world, but would be appalled at how some people’s political identity has consumed their way of life and driven wedges between friends and families.

The founding fathers envisioned everyone having access to life, liberty and the pursuit of happiness. There are many things they would be proud to see, but also things that would disappoint them. Ultimately, the foundation they laid has given us the greatest freedoms of any country in the world, for they saw us as becoming one country, one community, and one people.